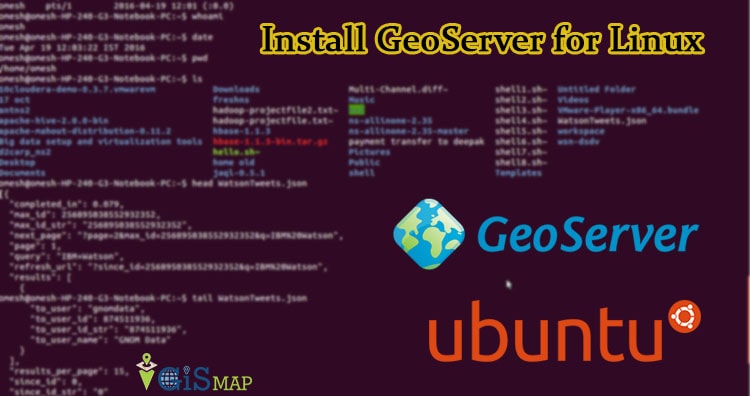 Install GeoServer for Linux System. For producing any detail map, we need to have large detailed dataset. If it is about country level or world level analysis it may create huge problem with huge dataset. It can hang your system or slow down it. Even for browser it is dangerous because browser takes time or get in not responding mode. More than this you want to change or query data with rendering it on map, this will take much of your precise time.

To solve this problem we use some servers which can handle the dataset and provide us when required. For the map data we have one the great solution that is geoserver. What is geoserver and how it is helping us… geoserver is an open-source server written in Java that allows users to share, process and edit geospatial data. It helps us to display the information to the world. It has a great feature that using WMS (Web Map Services) standards it provides variety for output format.

Now make sure that you have already installed Java Runtime Environment (JRE) in
your system. if not, please visit http://www.oracle.com/technetwork/java/javase/downloads/index.html website to download and install the JRE in your system. Currently Java 9 is not supported by geoserver so download JRE 8 from oracle.

Steps for installing GeoServer on Linux based operating system-

Extract the downloaded geoserver zip file. if you are not sure where to unzip it, navigate to usr/share folder and make a new folder name it as geoserver and unzip file in this folder.

Step 3 for installing geoserver in ubuntu-

To make sure you are the owner of the geoserver folder, run the give command
–> sudo chown -R USER_NAME /usr/share/geoserver/
Here replace USER_NAME with your user name. The user name can be your system’s user name, then it will ask for the password so give your system password.

After this navigate yourself to the bin folder inside the unzip geoserver folder and run the startup.sh file.To run this file on terminal, look given command
–> sh startup.sh

Give admin as username and geoserver as password. Create your workspace and datastores for various datasets and upload them on geoserver with various styles and icons.

If you have other query related to geoserver or publishing and styling dataset on geoserver, let us know via comments. We would definitely help you out.