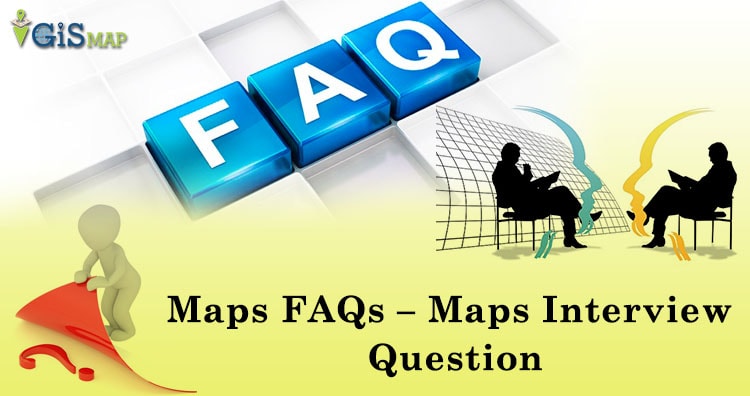 Maps shows a emphasizing relationships between elements of some space, such as objects, regions, or themes represented symbolically. Map is the shortened term referring to a two-dimensional representation of the surface of the world. Maps are most commonly used to depict geography, maps may represent any space, real or imagined, without regard to context or scale, such as in brain mapping, DNA mapping, or computer network topology mapping. Here in this post we will check FAQs of Map and Common Question asked during Interview Questions.

Que. Define Map?
Ans. A map is a visual representation of an entire area or a part of an area, typically represented on a flat surface. The work of a map is to illustrate specific and detailed features of a particular area, most frequently used to illustrate geography.

Que. Explain importance of legends.
Ans. legend is included with a map to unlock it. It gives you the information needed for the map to make sense.

Que. Explain importance of north arrow.
Ans. A north arrow (sometimes also called a compass rose) is a figure displaying the main directions, North, South, East and West. On a map it is used to indicate the direction of North.

Que. Explain importance of scale.
Ans. Map scale refers to the relationship (or ratio) between distance on a map and the corresponding distance on the ground.

Que. Explain importance of title.
Ans. Map title is an element in a Map layout that describes the theme or subject of a map. The map title should instantly give the viewer a good idea of What the map is depicting.

Que. Explain map projection.
Ans. A map projection is a systematic transformation of the latitudes and longitudes of locations from the surface of a sphere or an ellipsoid into locations on a plane. Maps cannot be created without map projections.

Que. What is ortho image.
Ans. orthoimage is an aerial photograph or image geometrically corrected (“orthorectified”) such that the scale is uniform: the photo has the same lack of distortion as a map.
name few types of map.
Climatic map.
Physical map.
Political map.
Street map.
Relief map.
Thematic map.
Topographical map.

Que. What is map element.
Ans. Almost all maps must include certain basic elements that provide the reader with critical information. Among these are the title, scale, legend, body of the map, north arrow, cartographer, neatline, date of production, projection used, and information about sources.

Que. What is conical map?
Ans. A method of projecting maps of parts of the earth’s spherical surface on a surrounding cone, which is then flattened to a plane surface having concentric circles as parallels of latitude and radiating lines from the apex as meridians.

Que. What is map symbols?
Ans. A map is a smaller representation of an area on the earth’s surface; therefore, map symbols are used to represent real objects. Without symbols, maps would not be possible. Both shapes and colors can be used for symbols on maps.

Que. Explain 4 types of distortion in map.
Ans. There are four basic characteristics of a map that are distorted to some degree, depending on the map projection used. These characteristics include distance, direction, shape, and area.

Que. What is distorted map?
Ans. distortion on a map or image is the misrepresentation of shape, area, distance, or direction of or between geographic features when compared to their true measurements on the curved surface of the earth.

Que. What is DEM?
Ans. Digital Elevation Models (DEMs) are a type of raster GIS layer. Raster GISrepresents the world as a regular arrangement of locations. In a DEM, each cell has a value corresponding to its elevation.

Que. What is DTM?
Ans. A DTM is effectively a DEM that has been augmented by elements such as breaklines and observations other than the original data to correct for artifacts produced by using only the original data.

Que. What is DSM ?
Ans. A DSM is an elevation model that includes the tops of buildings, trees, powerlines, and any other objects. Commonly this is seen as a canopy model and only ‘sees’ ground where there is nothing else overtop of it.

Que. Explain contours?
Ans. a line on a map joining points of equal height above or below sea level.

Que. What is thematic map?
Ans. A thematic map is a map that emphasizes a particular theme or special topic suchas the average distribution of rainfall in an area. They are different from general reference maps because they do not just show natural features like rivers, cities, political subdivisions and highways.

Que. What is physical map?
Ans. A physical map focuses on the geography of the area and will often have shaded relief to show the mountains and valleys.

Que. What is route map?
Ans.  A road map or route map is a map that primarily displays roads and transport links rather than natural geographical information. It is a type of navigational map that commonly includes political boundaries and labels, making it also a type of political map.

Que. What is land cover?
Ans.  Land cover is the observed (bio)physical cover on the earth’s surface. It should be confined to describe vegetation and man-made features.

Que. What is land use?
Ans.  Land use involves the management and modification of natural environment or wilderness into built environment such as settlements and semi-natural habitats such as arable fields, pastures, and managed woods.

Que. What is locator map?
Ans. A locator map, sometimes referred to simply as a locator, is typically a simple map used in cartography to show the location of a particular geographic area within its larger and presumably more familiar context.

I hope this Question answer might have helped you in understanding Maps and in clearing the Basics interview questions of Maps. Let us know if you have any other list of questions answer available in Maps by commenting below in the space provided.